Ridiculous. The game has been rearranged for tomorrow afternoon at 4:00pm GMT.

Roy Hodgson was confirmed as the new England manager on Tuesday afternoon. More to follow as soon as possible. 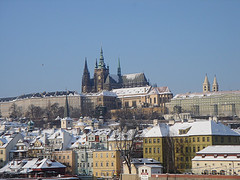 Here’s the incredibly late update about the Europa League:

Manchester City will play Aris Salonica of Greece, first leg in SalonicaÂ the day after Valentine’s DayÂ – I know a bit about Greek football and I can’t imagine there’ll be that many goals in either leg – Aris know how to park the bus away from home in particular.

A couple of days later Liverpool travel to Prague (left) to play Sparta. The Czech league has a massive winter break that starts in November and doesn’t end until after the Liverpool game, so at least the hosts will be well rested 😉

It’s only a month since the last post and it’s incredible how quickly things have changed: I thought Rafa Benitez would be out of a job, but Kenny Dalglish going back to Liverpool actually made me laugh!

Less than a year after his move from Middlesbrough – and with six weeks until the transfer window re-opens – it looks as if Roberto Mancini’s selection process may have had an unexpected affect on one of England’s promising youngsters. Guest blogger Thomas Rooney investigates.

Great things are expected of Adam Johnson. After impressing in his appearances so far for England, he has been touted as a big player for the national side in the future, with many pinning England’s hopes of Euro 2012 success firmly on his shoulders along with those of another few young stars currently lighting up the Premier League, such as Arsenal’s Jack Wilshere. However, the player realises that in order to fulfil his destiny on the biggest stage in international football, he needs to perform consistently for his club.Â Tired Of Riding The Pine?

The problem is that his club happens to be Manchester City, which sees world-class players warming the bench on a weekly basis. Although some of these individuals appear content to continue picking up their wages whilst sitting on the sidelines each week, it would seem that Johnson is different.Â

“Every footballer has to think about [moving on] when the time comes. It is still early but I definitely would consider it,” he said.Â

Johnson’s comments are likely to be received differently in different sectors, with some fans believing that the youngster reckons he’s too big for the club. With the playerstill developing and learning all the time, the chance to train with and observe some of the best players in world football under the guidance of one of Europe’s top coaches is an opportunity that no 23-year-old, no matter how talented, should pass up. The football predictionsÂ Â suggest City could qualify for the Champions League next season, which would offer Johnson another chance to develop, but there’s no guarantee he’d make the squad.

Some fans clearly think the player believes his own hype and should stick with the club as they seek to help develop him over the next couple of years. Any move could be crucial for his future and that of the England national team.Â

On the other hand, some fans have praised the player for not being content to pick up a hefty wage packet while doing nothing on the pitch, and others have urged him to take the plunge and make the move from Eastlands as they fear for his ability to improve under the management of such a defensive boss. If Johnson really is England’s brightest hope for the future, he needs to play regular first team football soon and the transfer rumours have linked him with a move.Â

Whatever Johnson and City decide to do, there are likely to be many fans of other clubs in England with one eye on the player.

Next game: 25th March in Cardiff against Wales.

Vaya con Dios, Diego Maradona: despite getting further than England but scoring fewer goals against Germany than England did, El Diego is now looking for another job. Presumably Ronald Reagan, Tony Blair, Margaret Thatcher, George Bush and FIFA mafiosi were to blame, not shoddy defending or inability/unwillingness by his strikers to track back.

Not nearly as harsh as what happened to the North Korean team though…and Fab goes marching on.

According to the BBC, two players from the Togolese football squad in Angola for the African Nations Cup have been injured following an attack on their team bus this afternoon. We’ll keep an eye on the situation.

UPDATE: ESPN Soccernet is reporting three players andÂ the bus driverÂ were injured and quotes Nantes striker Thomas Dossevi as saying that the team no longer wants to take part in the tournament.

UPDATE: Yahoo! Sports is reporting that the driver – who was Angolan – was killed and that two players and two medics were injured. Both Emmanuel Adebayor of Manchester City and Mustafa Salifou of Aston Villa are reported to be uninjured.

TogoÂ were scheduled to begin their Group B games on Monday with a game againstÂ Ghana in Cabinda, Angola.

UPDATE: VariousÂ news servicesÂ are reporting that Togo FA Vice President Gabriel Ameyi has announced that defender Serge Akakpo (of Romania’s FC Vaslui) was injured, but there seems to be some confusion over the identity of another wounded player, named as ‘Obilali Kossi’ – this might be either Obilali Kodjovi of GSI PontivyÂ in France or Kossi Agassa, who aslo plays in France for Istres in Ligue 2. Both players are goalkeepers.

Ameyi also commented that the team apparently did not tell the CAF that they were travelling by bus and that they ‘should have flown’ to Angola. Presumably the Togolese FA should have had some kind of say in that too?

Cabinda is an Angolan enclave surrounded by both the Democratic Republic of Congo (which older readers may remember as Zaire, the Belgian Congo or Congo Kinshasa) and the Republic of Congo (formerly known as Congo Brazzaville and the French Congo) and despite being an oil rich area hasÂ a history ofÂ political violenceÂ even though the Angolan Civil War ended in 2002.

OK, so the definition of ‘tomorrow’ was a bit flexible to say the least, but Saturday is here so let’s have a quick look at the games that feature England internationals. Not surprisingly, the first game of the day is the one with the most England squad members on show: Aston Villa v Chelsea (Sky Sports 1 now)Â could featureÂ seven players including Emile Heskey, who seems to want to leave Villa in order to improve his chances of making the squad next year; an odd time to start making these comments seeing as though the transfer window doesn’t re-open for a while yet. Still, at least he’s been honest enough to admit it and you have to admire that.

The rest of the weekend games don’t actually feature anyÂ fixtures where England players face each other: Steven Gerrard has withdrawn from the Liverpool team that is playing at Sunderland this afternoon and Wayne Rooney won’t be playing for Manchester United against Bolton. No doubt that both of them will be fine for their Champions League games next week.

A game to keep an eye on: Stoke v West Ham. It’s early enough in the season for the Hammers to turn it around but it’s a surprise seeing them in the bottom three: they snapped a three game losing streak with a draw in their last gameÂ v Fulham a couple of weeks ago, but Stoke aren’t exactly pushovers at the Britannia.

Couple of items to finish with. The draw for the UEFA playoffs will be made on Monday lunchtime, so we’ll have a reaction to that; and if we can find a transcript of what Sr. Maradona had to say on live TV that’s caused Sepp Blatter to investigate an outbreak of Potty Mouth after the game in MontevideoÂ then that’ll be posted too.

EnjoyÂ your weekend and thanks for reading.

2-1 this time, goals from Lampard (pen) and Defoe, the Slovenes got one back late in the game. Croatia are drawing 0-0 with Belarus, but there’s only about 20 minutes gone.

Slovenia are no mugs internationally speaking: since independence from the old Yugoslavia in 1991, they reached both Euro 2000 and the 2002 World Cup and they are currently ranked 57th in the world and 31st in Europe (which puts them ahead of Wales!) and they lie third in World Cup qualifying group three, two points behind Northern Ireland with three games left to play.

With a population of just over 2 million – about the size of Greater Manchester – it shouldn’t come as much of a surprise that nearly all of the squad play outside Slovenia. Their best known player is Robert Koren of West Brom, who also holds the record for the most international appearances. The potential goal scoring threat is Milivoje Novakovic of FC Koln who is a big unit and will test our defenders; on that subject, Gary Cahill of Bolton has been called up to provide cover for Wes Brown and John Terry – it’ll be interesting to see if he gets any playing time today.

Coverage on ITV starts at 4:45pm GMT and we’ll have the result when it comes in; over the next couple of days we’ll have a round up of the rest of today’s qualifiers.